This week's photo is another one taken on my visit to Split. 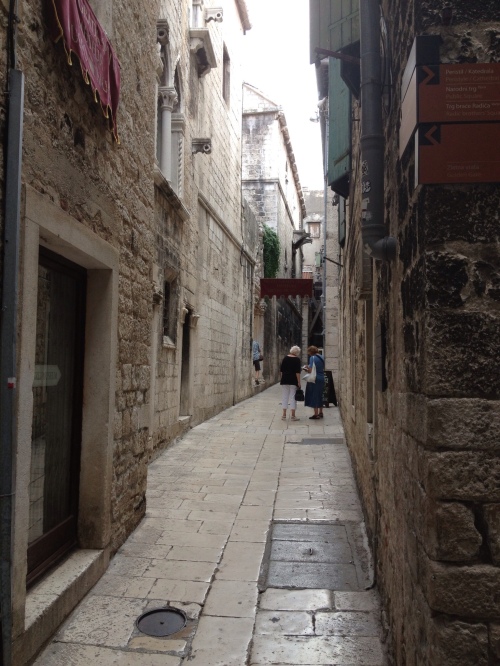 One of the greatest pleasures I have in travel just wandering around a new town. Sometimes it leads me nowhere, other times I end up in small alleyways like this. As you can see there is nothing particular happening in the photo. However, I just felt the need to take the photo.

There was a late start to the day. The past couple of days have been hectic. The hostel served breakfast which consisted of scrambled eggs and zucchini fritters. It was tasty and well worth the wait. My plan was to explore the town and make my way towards the market.

The sun was still out so it was right to enjoy the day. Split is a small city so it was easy to explore. There were plenty of opportunities to take photos. 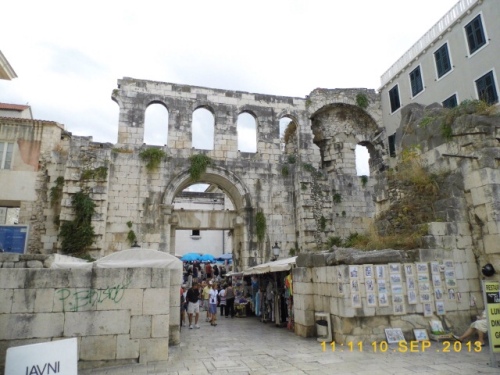 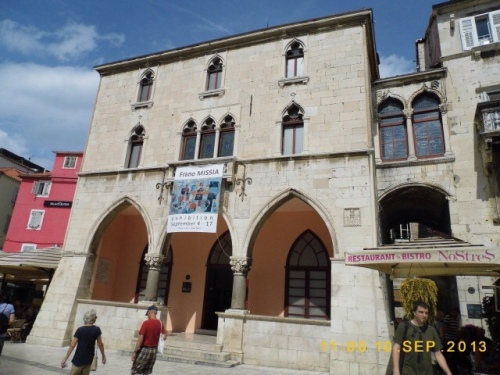 Off course it was the perfect opportunity to enjoy the first gelato of the trip. Today I had Jaffa flavour. That's chocolate and orange to you and me.

By the mid-afternoon I was starting to flag. Time to get back to the hostel for a quick nap. After waking up I decided I was going to stay in for the night. Josko was cooking a meal for us so it felt right to take things easy. Josko also mentioned that he was planning to take a group of us to the national park. I had heard so much about this from both Josko and Charles. Without too much thought I said yes. I knew I was going to look forward to this. Roll on tomorrow.

The coach pulled into Victoria Coach Station at around 1am. It was only an hour and ten minutes late. Still meant that I had missed my connecting coach to Gatwick Airport. There was another coach due to leave at 1:30. The driver said there was plenty of room but I had to get my ticket changed first. This was done easy enough and soon I was on my way to the airport. As much as I tried to get some sleep I was feeling too excited to settle down.

Arriving into the airport gave me the first chance to relax. Maybe arriving an hour later was a blessing in disguise as I spent less time waiting around in Gatwick. After drinking a cup of coffee to help keep me awake I checked in my rucksack. Typically it was classed as oversized. Time to wait for a member of staff to come and take it off me. After getting through check-in I was fighting to keep myself awake while I waited to board the flight. It was 4:00 and the duty free shops were opening. What a time to start work.

The flight to Split went smoothly. I must admit to not being one of the world's greatest flyers. Flew by Easyjet and it was not too bad considering it was my first experience with them. After collecting my rucksack Josko from the Split Guesthouse was there to take me to the hostel. Talking to him gave me the impression that he seemed a decent person bad I was going to enjoy my stay at the hostel.

Upon arriving Josko went out of his way to introduce me to everybody in the hostel. After a quick shower and change of clothes I was ready to hit the town. Charles from Canada suggested that I could tag along with him, Pavel, Manfred and Jeanette. Manfred was going home later that day so we wandered into the old town.

It was busy as it was lunchtime so we decided to climb the Bell Tower of St. Domnius. A tight climb but once at the top you are rewarded with excellent views of the city and harbour. Walking along the waterfront with Manfred we were stopped by reporters from RTL. They asked Manfred for his thoughts on Split. I was waiting for my turn but alas they ignored me. Another bid for stardom thwarted.

Walking back towards the hostel it was suggested that we should hire bicycles for the afternoon. Somehow I agreed it was a good idea. So I paid 40kn for four hours. I had forgotten that I had not ridden a bike in over ten years. Yes, it is true you never forget how to ride one. Good job we were going downhill and the roads were quiet. Soon we were at the beach. A large beer was called for. Maybe this was not the greatest idea as I had not eaten since 1am. I was surprised that I could keep control of the bike.

Manfred suffered a problem when the chain on his bike snapped. Manfred, Charles and Pavel were looking for a cliff to jump off. There were plenty of them, the problem was how to climb back up. Manfred took his bike back while the rest of us went to find somewhere to eat. Josko had recommended the Fife as a popular and cheap place to eat. I ordered a local variation of Bangers and Mash. It tastes excellent and it had been well earnt.

The afternoon had been great fun but it was soon time to return the bikes. One tip when hiring a bicycle, make sure you know your route back. We ended up having carry the bikes up a load of stairs.

Back at the hostel Josko treated everybody with a bottle of Absolute Vodka to share amongst us. Joined by a Australian and Welsh couple we were enjoying the vodka along with some beer. At 11pm it was decided we would venture into the old town to find some bars. It was a enjoyable night. The bars themselves were only a small room but the atmosphere was perfect. Even though I started to flag a little towards the end, it had been a great first day of my trip. Hopefully, the shape of things to come.

This week's photo is the statue of Gregory of Nin. 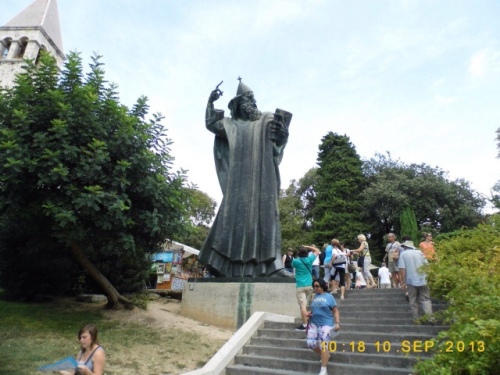 This statue is located in Split. It was designed and sculptured by Ivan Mestrovic. Gregory of Nin was a 10th century bishop who introduced the local language into church services replacing Latin. This move was opposed by the Pope. However, by introducing the Croatian language into the services Gregory helped to strengthen Christianity in Croatia.

The statue itself is popular with tourists. Rubbing the toe of the statue is supposed to bring you good luck.

This weeks photo is the view of Split taken from the bell tower. 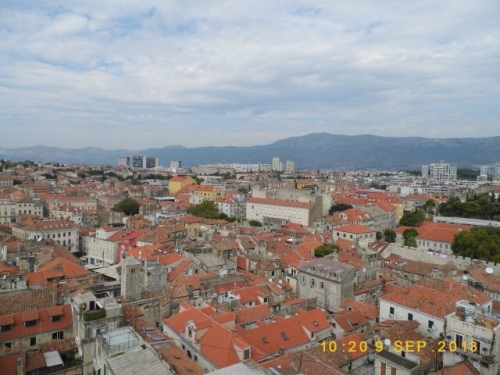 This photo shows plenty of the old town. You can also see the mountains in the background. The photo was taken on the first day of my recent trip. This was to set the sense for all the trip. 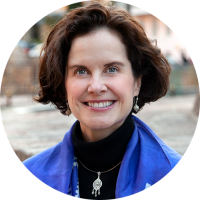 Adventures Around Asia
No Ordinary Nomad